My sketch diary has gone a bit rogue and very personal for December, because I spent a lot more time on this sketch than I usually do. It’s relating to depression and anxiety, which I’ve wanted to discuss for a while in relation to creativity. So, this won’t be the usual cheery sketch or post, but I hope it might help someone somehow.

In Greek mythology, the goddess Nyx (Night) had a brood of lovely (I’m being sarcastic) children. One of her children was Oizys, the goddess of despair and anguish. In Roman Mythology she is known as Miseria, which hardly needs saying is where the word ‘misery’ comes from. 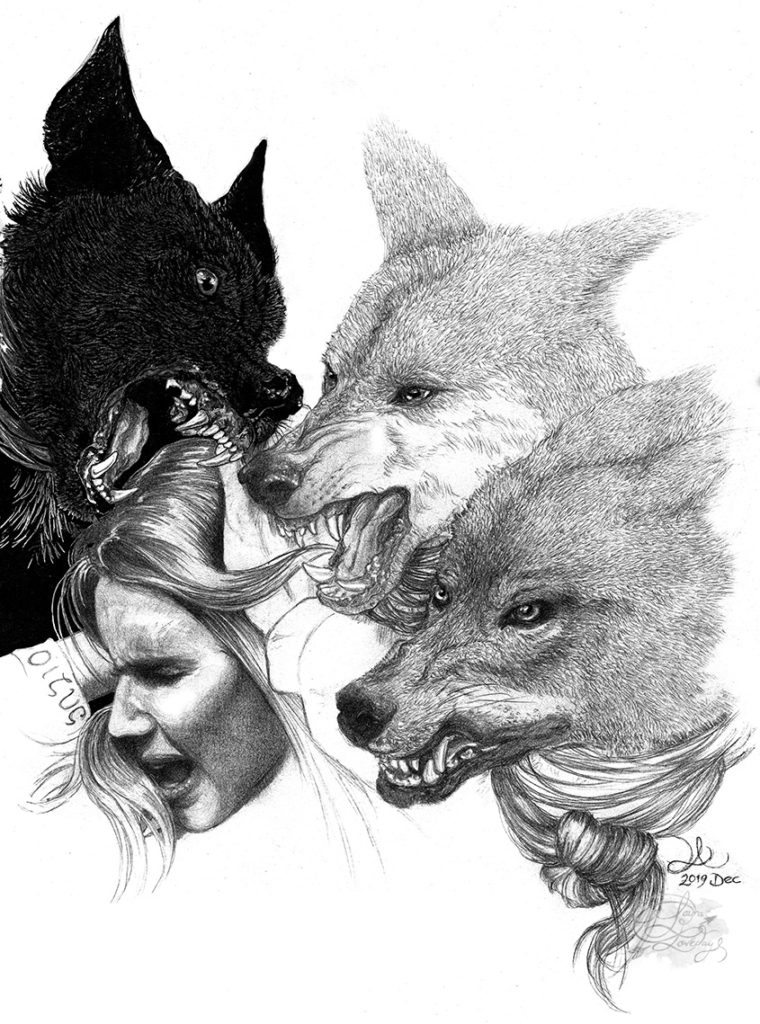 In my drawing based on Oizys, the different aspects of depression are shown through vicious wild dogs. The person cowers from the bombardment, but her attackers are literally bound to her. In this case, her hair forms their collars and links them all.  The dogs personifying anxiety and ruthless negativity are constantly sniping at the person, blocking her in.

Obviously this is a take on the famous ‘black dog on my shoulder’ phrase. There’s an article on PsychCentral which talks of the importance of controlling the black dog of depression before it gets out of control. I’d be a very stupid sadist if I disagreed with that, but my hot take (or maybe a tepid take) is that I think it’s important for me to own my depression. I don’t see it as my enemy, because it’s part of me. I’ve had it since I was a child, and I recognise its link with my need to create. As strange as it may sound—considering that I’ve been suicidally depressed several times—as a result of my depression, I love life all the more. It has led me to filter the excess of emotion into creativity to find solace and immense satisfaction from it.

I started this as a simple sketch which grew more detailed over a few days while in the eye of my own personal storm, so to speak. It helped to have the torment of my depression represented.

If you look through my portfolio, you’ll see how my artwork is primarily lighthearted, so this is an unusual, painful drawing for me but one I thought I’d share, because others might identify with it.

The word artist’ for many conjures up the stereotype of the talented but tortured artist, isolated and struggling against unhappiness reminiscent of Van Gogh, with varying degrees of drama involved. Creativity and mental illness doesn’t always go hand, but they often do. It’s obviously deeply personal and different for everyone and I can only speak for myself, but it is always a struggle no matter who you are, what you do, or what your situation in life is. I can only speak for myself and my ‘relationship’ with depression and anxiety which is shown in this drawing, so if you’re still reading this — thank you. It’s important for anyone to be heard and maybe for others to hear and know that they’re not alone. 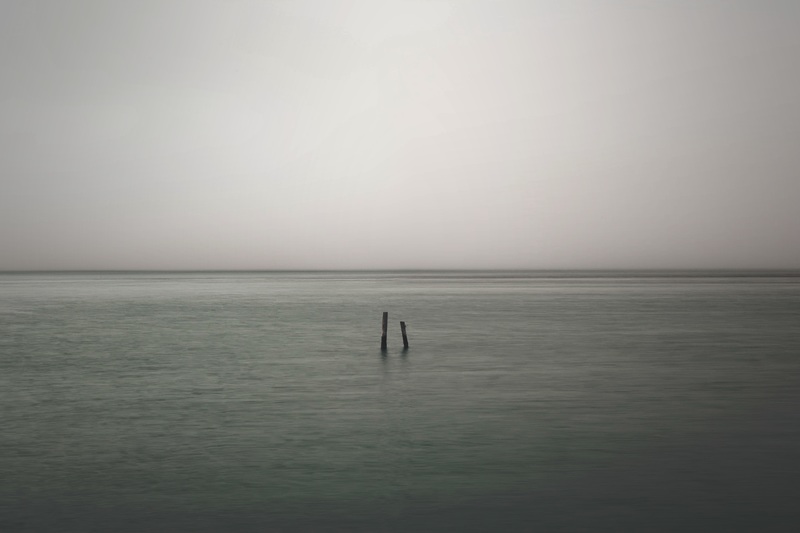 I was told about Touched with Fire by a friend years ago when I was going through a rough time and couldn’t make sense of anything. My mind was like a box of oversensitive frogs, aimlessly scrabbling up the walls, so I’d read anything which would be a distraction.

At the beginning of the book are pages and pages of famous names from the world of fine art, to music, to literature, to film; the link between them all being a mental illness. While some might think there may be some egotistical pleasure in also being linked in any way with such people, I doubt that anyone would in reality.

The book covers that link between creativity and the often brutal realities of living with depression.

Depression affects not only mood but the nature and content of thought as well. Thinking processes almost always slow down, and decisiveness is replaced by indecision and rumination. The ability to concentrate is usually greatly impaired and willful action and thought become difficult if not impossible.

Depression is a misleading word, in that for many that’s only a quarter of the issue. The fluctuations between the hyper, almost drunkenly ecstatic moods swing back and forth between the less socially acceptable anger, paranoia, and fatigue, and then to the excruciating depression.

Maybe you cry at the slightest provocation, or maybe you’re not able to have even that release. It won’t let you sleep, like there’s a powerhouse of a buzzing beehive in your mind torturing you with any mistakes, regret and memories which hurt you. You forget what ‘normal’ is or whether it ever truly existed. You doubt yourself constantly after being attacked by the overwhelmingly negative thoughts until you’re unable to distinguish between truth and lies, and though they all originate from yourself, you ascribe them to the entire world. It ruins you physically and mentally as well as emotionally, impairing basic functions and self care. For me, thought processes, like memory, are faulty, until I’m reduced to being as vulnerable as a tiny mouse in a cage and totally reliant on the kindness and understanding of family and friends.

And before all this, there’s the turmoil of having felt it creeping up on you like an encroaching tide, but not knowing exactly what you can do to stop it. It can seem unassailable, and beyond anything, you just want it to stop.

However, for many, the one bright spark is that with a depressive episode you might feel that with it comes a surge of creativity: a flood of ideas and immense productivity before it crashes around you.

Like some autoimmune diseases, the invisibility of mental health is like another slap in the face somehow. I find myself wishing that there was something to show for how terrible it can be.

The stigma of mental illness is still present, unfortunately. Even I call myself crazy sometimes, and I know as well as anyone that depression is as valid an illness as any. It can be as lethal as a plague, but still you’ll meet people who can’t empathise. That’s often the most difficult and disappointing part.

So I was, at the point where I drew this, a self-described basketcase drowning in depression and anxiety, thinking that it would never end. But it lessens. It really  doesn’t last forever, though it’s hard to think that at the time.

Be kind to yourself.

Hi! I'm Laura and I'm an artist and illustrator living by the sea in Cornwall, United Kingdom. I love creating detailed, gilded, multimedia pictures of the natural world, and share my sketches, processes, tips I've learnt, and beautiful things I've come across to admire and inspire. Please follow my blog and social media for a funfair of artiness and discussion!

A Cow with a Pearl Earring

Learn to love the pigeon! Surprising facts about...

Redraw: Fox at the Supermarket

Some Hidden Soul Beneath

Hello! I’m Laura in the beautiful Cornwall in the UK. and I love drawing nature and making things. Since being diagnosed with M.S., I also post about how to stay creative and happy, despite the crud life can throw at you.
Read More… and please say hi!

This website uses cookies to improve your experience. We'll assume you're ok with this, but you can opt-out if you wish. Accept Read More